Jon Doe commits a crime in country A. Digital evidence pertaining to the investigation of that crime is stored on the perpetrators electronic devices, which are located in Country B. Some additional evidence is stored in servers owned by an email service provider (ESP). While the ESP is registered in Country D, its servers are physically located in Country E. In the age of digital communications and cloud computing, law enforcement agencies are called to delicately maneuver this web of jurisdictions in order to obtain necessary evidence and run effective investigations.

The traditional approach has also been to rely on mutual legal assistance arrangements (MLAs) namely concluded through bilateral and multilateral treaties. These agreements lay the foundations for the gathering and exchanging of information in the enforcement of public or criminal laws. For example of a multilateral arrangement consider the 2003 Agreement on Mutual Legal Assistance between the European Union and the United States of America. For a bilateral example consider the Treaty between the Government of the Republic of India and the Government of Canada on Mutual Assistance in Criminal Matters which was signed in 1994.

The 21st century’s move towards digital communications, online services, and cloud computing has complicated traditional legal cooperation in this space. The slow pace of the current MLA process for cross-border data requests has frustrated criminal investigators in many countries. Consider for example a typical process for legal assistance between the UK and the US as it currently stands. The UK Foreign Office sends a request for communications content data by a US company to the US Department of Justice Office of International Affairs (OIA). OIA works with the UK Foreign Office to ensure the request satisfies US legal standards and then works with a US Attorney to send the request to the District Court either in the D.C. area or in the jurisdiction where the evidence is held. The judge reviews the request and grants its, or sends it back to OIA for further iterations with the UK Foreign Office. If granted the request goes to the company, which sends a response to OIA, which checks the response and in turn sends the response to the UK (see graph A below).

The inability of companies to respond directly to the requesting country, even though the request has been judicially approved, significantly slows down the process. Moreover the need of the requesting Country to comply with the criminal standards in the requested State adds further frustration. As the European Commission noted in a recent “inception impact assessment” report on the issue:

“While a national request to service providers takes in general a few days at most, MLA requests to the U.S. as the main recipient take around 10 months on average and require significant resources. In such cases, the evidence transmitted is often outdated or comes too late... Through direct cooperation between authorities in EU Member States and service providers in the U.S., which is possible under U.S. law for non-content data, the latter receives more than 100,000 requests per year, compared to about 4,000 requests under the E.U.-U.S. MLA Convention”. 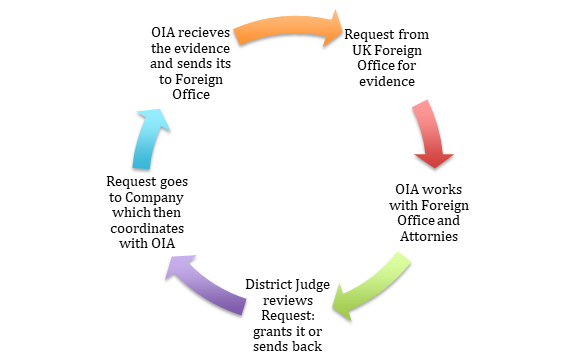 To this one needs to add the opacity that is the result of the storage practices of ESPs. The U.S. National Institute of Standards and Technology (NIST) of the U.S. Department of Commerce, identifies Cloud Computing as a “model for enabling ubiquitous, convenient, on-demand network access to a shared pool of configurable computing resources (e.g., networks, servers, storage, applications, and services) that can be rapidly provisioned and released with minimal management effort or service provider interaction”. At the heart of the model thus stands the idea that the physical storage of data may span multiple servers and thus multiple jurisdictions. The hosting company may not even be aware where a particular email is stored at a particular time. The (un)territoriality of data thus introduces a new challenge to traditional conceptualizations of jurisdiction. See in this regards the comments raised by the Group of Experts that drafted Tallinn Manual 2.0 (p.68):

“The experts noted that it sometimes may be impossible or difficult to reliably identify the State in which the digital evidence or other data subject to extraterritorial enforcement jurisdiction resides. They agreed that international law does not address this situation with clarity. Therefore no consensus could be achieved as to whether a state may exercise extraterritorial enforcement jurisdiction in such cases by taking law enforcement measures regarding that evidence or data.”[1]

In this short blog post I wish not to tackle this complex issue of jurisdiction. Instead I hope to map out recent developments in States’ practice to provide scholars entering the field with some broad background into the current state of affairs.

For those interested in the topic Georgia Tech runs a “Cross Border Requests for Data” Project. In May the University ran four panels at an event titled “Surveillance, Privacy, and Data Across Borders: Trans-Atlantic Perspectives” (the panels were all live-streamed and the videos are available online). The topics discussed ranged from how to reform MLAs, the pending US-UK agreement, international law and cross border data requests and hacking operations. The May sessions were then turned into a symposium on the LAWFARE Blog, which is highly recommended. Earlier in January Georgia Tech ran a smaller event in Brussels, which was then used to launch a series of academic papers on cross-border access to user data.