A Fast and Scalable Distributed Ledger Protocol
It is by now well known that the classic Bitcoin protocol laid down by Satoshi Nakamoto doesn’t remain secure when block sizes are increased or block creation rates are sped up. This has caused quite a lot of turmoil in the Bitcoin community, as heated debates began regarding the best ways to scale the protocol.

In a new paper that we just wrote we describe a DAG-based protocol for a permissionless distributed ledger that establishes high throughput and fast confirmation times while maintaining resilience to 50% attackers.

The implications are quite dramatic: it is possible to securely set the block creation rate in the protocol to be very high, perhaps several blocks per second. This results in:

We hope that this contribution will complement other efforts (such as off-chain transaction channels) and will enable cryptocurrencies to scale. The purpose of this post is to explain the general idea behind the protocol in the hope of making it more accessible. The full details, including some lengthy proofs of correctness, appear in the full online version.

The basic properties of SPECTRE

Both properties hold assuming the attacker holds less than 50% of the hash rate. Just as with the Bitcoin protocol, the probability of a successful double spend decreases exponentially with each block that is built above the transaction. The difference here is that blocks in SPECTRE are created extremely fast.

The weak liveness property above only applies to honest users: a malicious user that double spends may have his transactions delayed indefinitely — neither accepted nor rejected, but rather in an indefinite “pending” state. The recipients of the double spend will not consider the money received (and are therefore safe from any fraud).

To give a feel for the numbers: let’s assume that it takes around 5 seconds to relay blocks to the vast majority of miners, and the block creation rate is set to 10 blocks per second. Say the merchant is willing to tolerate a risk of 1% of transaction reversal by an attacker with 10% of the hash rate, then he can accept the transaction after approximately 10 seconds. Compare that to Bitcoin: to receive a similar level of security from a 10% attacker, the merchant would need over 7 confirmations which would take roughly 70 minutes to obtain.

Here are some simulation results for the time till transactions become irreversible (from a global oracle’s point of view). Epsilon is the probability of transaction reversal by an attacker with 25% of the hash rate (in this example) and the block creation rate is 10 blocks per second. 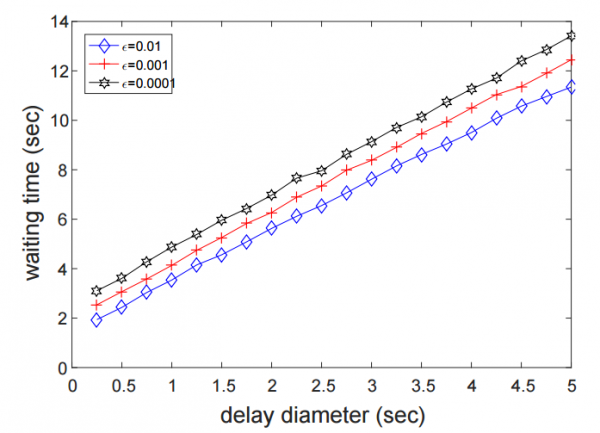 From block chains to block DAGs

The main problem that arises when block creation rates are increased in Bitcoin, is that blocks are often created in parallel without referencing each other. Such blocks are considered conflicting, and are “thrown away” by Bitcoin’s protocol if they are not on the longest chain.

While in miners “classic” Bitcoin create blocks that contain the hash of a single parent block and extend a single chain, SPECTRE naturally includes blocks that were created in parallel. Under SPECTRE, each block may reference several predecessors. The resulting structure is a Direct Acyclic Graph (DAG) of blocks. For example, you may get something like this: 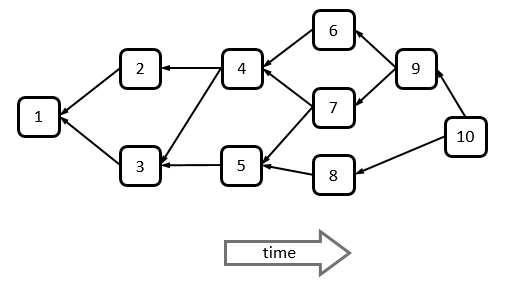 A Block DAG. Each block may refer to several predecessor blocks by including their hash in its header.

Notice that the arrows in the figure above (which correspond to hash referrals) point backward in time. The block DAG actually represents a “causal relation”: if block x included the hash of block y, then x must have been created after y.

Miners in SPECTRE are asked to include a reference to all “tips” of the block DAG that they are aware of, that is, to all blocks that have not been extended thus far. A block is only considered valid if all of its predecessors are valid, and known by the node (thus, if block x references some block y, there is no need to reference y’s predecessors as well — this is implied).

As in Bitcoin, miners are required to broadcast blocks they create or receive as quickly as possible, but we do not assume that all miners share the exact same view of the DAG at all times (some recent blocks may not be known to all).

Blocks in SPECTRE may contain conflicting transactions (after all, they are often created in parallel without miners knowing about each other’s work). The heart of the protocol is the way it constructs the set of accepted transactions.

Step 2: Output a set of accepted transactions. A transaction embedded in block x is considered “accepted” if block x defeats all blocks that contain conflicting transactions, and all inputs of x were accepted.

A few comments before we continue:

The core of the protocol is establishing the “defeat” relation in Step 1 above, given some block DAG. This is done via a voting procedure.

Given two blocks x,y we decide whether x<y or y<x by taking a vote. The voters are all blocks in the DAG. The vote of each block is not explicitly written in the block, but is rather deduced via the structure of the DAG.

Here is an example of the voting procedure for one such pair: 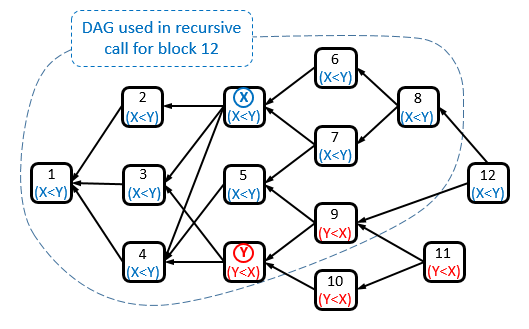 An example of the voting procedure in the DAG for blocks x,y.

Another useful observation is that the voting procedure used in SPECTRE matches the longest-chain rule when it is applied to simple chains: each of the blocks in the longer chain defeats all blocks in the shorter one.

In general, it isn’t enough to see a transaction accepted by the protocol. What we need most of all is a guarantee that it will remain accepted forever with high probability. SPECTRE includes a procedure that analyzes the block DAG and outputs the safety level of transactions. SPECTRE’s acceptance policy is quite technical, but still relies on similar principles like the voting procedure above. Robustness is achieved thanks to the fact that new blocks vote according to the majority of their predecessors: the result of the vote becomes stronger as each new block supports the majority.

Here are a few answers to questions that are likely to come up:

Mining rewards: In SPECTRE all valid blocks receive the same block reward. The reward is reduced if the block was mined according to a lower difficulty than the current one. The schedule of money creation can be decided by the designers of the cryptocurrency.

Transaction fees: The fee from a transaction is given to the block that contained it. In case several blocks contain the same transaction, the allocation of the transaction’s fee to different miners is considered a conflicting transaction (separate from the transfer itself). Accordingly, the block that defeats the others wins the reward exclusively. Miners can agree on a division of the fees early in case resolution of the conflict is delayed (see further details in the paper).

Difficulty adjustments: As in Bitcoin, we must limit the number of blocks created per second. The main bottleneck of the system is the bandwidth of nodes. Accordingly, a reasonable setup would be to aim at some given bandwidth, e.g., 1 MB per second. This can be achieved, for example, by creating 10 blocks of 100 KB each second. The precise way that the difficulty is calculated is defined in the paper.

Efficient implementation: At first glance it seems SPECTRE involves a great deal of computation: there are many pairs of blocks that need to be compared, and each vote procedure requires naively to determine the way each block would vote. Fortunately, it can be shown that the decisions on each vote can be computed efficiently, and that relatively few pairs of blocks ever need to be compared. We hope to release our efficient implementation of the core of the protocol soon.

Increased throughput: In principle, blocks that are created in parallel may include the same transactions which may lead to very little increase in throughput. However, a previous paper that we wrote on inclusive blockchain protocols analyzes the incentives of miners in a similar scenario. Miners are in fact incentivized to randomly select transactions from their mempool. If the mempool is large enough (and it will be if throughput is constrained) then few collisions between transactions in parallel blocks are expected to occur.