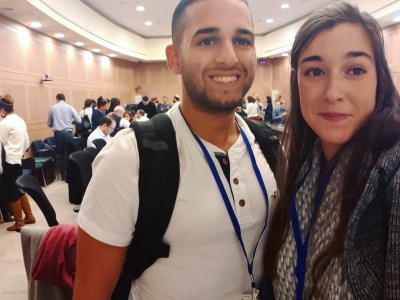 Aviv and Omri drafted the Clinic's position regarding a Bill which obligate Internet service providers in Israel to run internet filtering services as a default. The clinic's position is that due to technological barriers, the Bill violates the rights to freedom of expression and privacy, and could not be implemented efficiently.

Roni and Or offer legal aid to clients who suffer from social harassment in cyber space – in dating sites or other online platforms. They research the legal definition of sexual harassment and its application in cyberspace.

Linor and Gal drafted the clinic's position paper concerning public elected official who block users from their social media pages due to posting of critical content. Our position is that this practice is unconstitutional as it violates the users' rights to freedom of speech and freedom of information.

Roy, Anita and Coral offer legal aid to clients who were impersonated online and suffered violation of privacy and harassment. They research the application of a 'duty of care' under the Israeli tort law on different internet service providers.

Avihai and Tom offer legal aid to a political party and its campaign manager, after ads campaign they wanted to publish on Facebook were deleted, and their account was blocked. In our position Facebook's behavior was unlawful.

Daniel and Yair offer legal aid to a client who was sued after posting critic information concerning the behavior of kinder-garden teachers. The clinic's position that such a lawsuit has element of SLAPP (strategic lawsuit against public participation), and therefore has a chilling effect on freedom of expression online.

Eden and Shahar drafted a letter to the Israeli National Insurance Institute, following a tender the institute published for data mining services, and surveillance of public discourse on social media online. Our position is that such services require at least specific authorization by law. The NII doesn't have such authorization, therefore the tender is illegal.

David and Michael research the possibility of applying legal responsibility to human rights by internet intermediaries under the Israeli law.